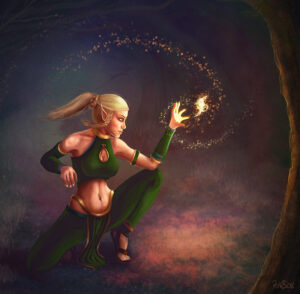 We almost lost him. One more inch…and he would have gone right off that bridge.

Despite herself, Kethra had to admit she was impressed with Mhardaveth. Even before finding the object of their quest, his holy powers (and strong shield arm!) had made the difference between life and death several times. The old man was only more invigorated now that they had found the sunsword. For someone who was mostly a ceremonial guard, he fought with skill and vigor unlike anything the sorceress had ever seen.

Picture of kethraHer initial distaste towards him had lessened as well. If she were to be honest with herself, Kethra would admit that the reason she had taken such a dislike to him had been his age. Not exactly that he was old, but that he was a reminder that she would age as well…her beauty would fade and wither away, unlike her hated elven peers who would remain beautiful until their last days.

She had hated him for reminding her of her mortality.

Initially, she had also been supremely frustrated at Mhardaveth‘s senility; Kethra rarely had patience for even normal forgetfulness, and the paladin’s dementia had tested her to the extreme. That night, though, where Mhardaveth…changed…for lack of a better word. He was calm, focused and deliberate…and it frightened her. Here was a man whose greatest opponent was his own mind; who knew he periodically drifted off into another state where he was a shell of his real self…and had no control over when it happened or why. Since then, she never reacted negatively to his forgetfulness or snapped when he just repeated himself over and over and over again…she instead tried to remember the noble man who carried with him a constant struggle that she honestly thought he couldn’t prevail against.

If this is aging, thought Kethra, I want no part of it.

She knew that was shallow, especially in the face of one who was fighting the process and was still doing good in the world (Was that Kethra‘s goal? To do ‘good’ in the world? She wasn’t sure; just a few months ago she might have said no, but now…). Nevertheless, the idea of losing her sense of self, all the flaws and perfections that made her Kethra…?

No. She would have none of it.

She felt herself close to admitting something, something disturbing.

She felt the fear rising; it wasn’t the first time she had come close to admitting this thought but every time before, she had pushed it away. Now though, watching Mhardaveth help up Milo (whom she was also starting to really like; it’s hard to have poor self-esteem when he’s around!), she decided to have the same courage as the old man. So she let the thought forward:

She had seriously considered being turned into a vampiress to make sure she never aged again and would remain beautiful forever.

Hot tears rushed to her eyes and streamed silently down her cheeks as she set her jaw in embarrassment. The truth was, Mhardaveth, in his fight against his aging and all the curses that come with it had shamed her. How could she have entertained that dark proposal when she had the example of the paladin right next to her, showing her a different path? Was she really so shallow, so vain, so…useless?

She brushed away the tears, her lips closing into a tight grin. But I don’t have to be that way anymore. I can be better. I have to be better. And not just for me…

Behind her, Yorword had reverted back to his own half-elven form. Kethra‘s heart sank a little every time that happened; he looked so old now, older than Mhardaveth, even. The banshee had aged him with her ancient curse, adding 40 years of toil to his already old body. But that wasn’t even her main concern; she feared what it did to his mind…

Pulling him aside so that no one else could hear, she asked how he was doing.

“Not…not very good, Kethra,” the druid stammered in response. “I….I…I…hate this place, and everything in it.”

She nodded in reply, hoping the expression on her face was one that communicated sympathy; she was never good at this sort of thing, and was becoming painfully aware of that more and more. She knew that, as far as Yorword was concerned, she was a poor substitute for Brock, who would have done a better job keeping the druid’s spirits up. Tentatively, she stroked his arm in sympathy. Yorword looked at her hand, then shot her a confused look, to which Kethra pursed her lips and awkwardly ceased contact.

“Kethra, you know those animals I like to pretend to be by turning into them?”

Kethra could see the struggle in his sad eyes. She held her breath.

“I think I want to turn into one…and just never turn back.”

“Well, you could, but…well, I mean…if you did, who would be there to snap me out of things when I fall into one of my states after a vampire has threatened to turn me into his bride?”

Yorword looked at her deep in her eyes, held the stare for a moment or two, but it seemed like forever to Kethra.

The druid went to rejoin the rest of the group. Crying silently, Kethra followed.