The adventurers rest, exhausted after a hard days march. A light snowfall is beginning. As they begin to set up camp the snow gets heavier and heavier. Over the crest of the ridge comes some remorhaz! The glacial beasts are drawing all the heat out of the air to charge their internal furnaces. Fortunately, these beasts are juveniles and have not yet fully developed the distinctive burning gem-like protuberances that these monsters are famous for. The party has a choice:

DC 25 – 20 with lit fire and prior preparations – The pine trees and flowers look pleasant while the sun shines, but come nightfall the temperature drops low enough to kill the unprepared.

While this is ongoing, hungry dire bears appear on a small ridge and charge the heroes. 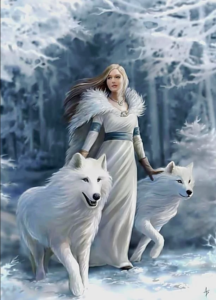 … dazed from the hit, Breath sees standing on a ridge, watching us… through the weather and snow, he can see a druid protecting this area… she elects to call off her protectors… realizing that perhaps the party are not a threat to the natural order of things.  A strange sound is audible above the howling winds, and at it… the dire bears break off combat.  Looking back to the ridge to thank the figure… she is nowhere to be seen.

… to emulate the environmental resistance of the druids of the party… his time in the forest gives him an affinity for a time.

DC 30 – 25 with proper equipment – The wind tries to pluck you away from the rock face. Beneath you void yawns invitingly.

… to use the secret magic of the elves to achieve impossible dexterity and light-footedness of the faerie folk.  He walks on top of the snow and ice as if he’s weightless, oblivious to the dangers his party faces.

… as the wind blows hard against the party, a vision from The Wyrm shows him other adventurers who have traversed this path before, and where they have sought safe-footing and sure handholds to avoid falling victim to the ice and snow.

Shelter from the Storm

The adventurers need to get someplace warm and sheltered from the howling wind and fast! If they don’t seek shelter soon they will likely die of exposure; an ignoble death for brave adventurers. In the distance is a ruined farmhouse… with a fire going! The adventurers can smell cooking food. Getting closer they see that it is a hobgoblin war band sheltering here. The hobgoblins are unlikely to share what little they have; that would mean death for all. The adventurers must fight to the death over a warm fire and a bowl of fish-head soup! Being an adventurer means sometimes you are riding high in glory and sometimes you are caked in mud and snow and killing hobgoblins for their clothes and blankets.

100gp from the hobgoblins