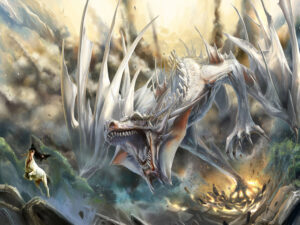 True dragons are winged reptiles of ancient lineage and fearsome power. They are known and feared for their predatory cunning and greed, with the oldest dragons accounted as some of the most powerful creatures in the world. Dragons are also magical creatures whose innate power fuels their dreaded breath weapons and other preternatural abilities.

First met in it’s lair in The Flying Citadel

A white dragon has feral eyes, a sleek profile, and a spined crest. The scales of a wyrmling white dragon glisten pure white. As the dragon ages, its sheen disappears and some of its scales begin to darken, so that by the time it is old, it is mottled by patches of pale blue and light gray.

This patterning helps the dragon blend into the realms of ice and stone in which it hunts, and to fade from view when it soars across a cloud-filled sky.

The smallest, least intelligent, and most animalistic of the chromatic dragons, white dragons dwell in frigid climes, favoring arctic areas or icy mountains. They are vicious, cruel reptiles driven by hunger and greed.