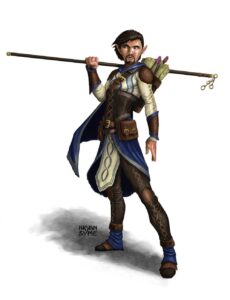 Found by the heroes, bound and tied deep in the encampment of the Dragon Cultists.

Through diligent research and interviews conducted during his travels between Berdusk and Candlekeep, Leosin became convinced that the cult is engaged in a big operation, but doe does not yet know what it is. Leosin used the raid on Greenest as an opportunity to infiltrate the cult so that he could learn more about the cult’s plans, but was discovered and captured. Were it not for the heroes rescue, who knows what may have happened.