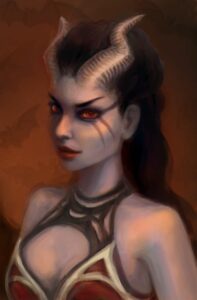 Hope not! I look terrible…or more terrible than usual. I’m covered in scorch marks and bandaging and I smell like ozone or something. It’s terrible!!

How did I get this way? Glad you asked…

So we’re still in Greenest, and trying to get as many people safe from the Dragon Cult as possible. We finally get to the keep with people in tow and the Mayor calls for us. People are looking at us like we’re heroes…and maybe we are! I dunno…it’s all really exciting, and we haven’t really had a chance to catch our breath. I wish I could say that people now looked at me without the distrust I’ve come to expect…but I don’t want to lie to you. Emoji

Anyway, when we get up there, there’s tons of people. All crowding around, panicking; it was hard to breathe. Zane pulled us through to the mayor though; he’s just so charming and leader-like (wait until later to hear about that!), people just made sure not to be in his way. I’m falling for him, I really am. I just can’t stand the idea that I look like an idiot to him…

…so of course I PROMPTLY LOOK LIKE AN IDIOT IN FRONT OF HIM!! I don’t know what came over me, but the priest from that small temple I mentioned last time? He’s here! He’s here!! All safe with us, while his parishoners died around him with him doing nothing!

I lost it. I’m ashamed to admit this now, but I totally lost it. Ran up to him screaming at him and accusing him of not defending his people, the people in his charge, who ran to his house of ‘worship’ for protection…ugh, I made such a scene! I couldn’t help it though…just seemed like such a lie to those people.

(Upside to all this was receiving comfort from Zane afterwards…even if he thought me stupid, it was sooooo niiiiiice to have his arm around my shoulder. Emoji )

That was the last good thing, though…you won’t believe what happened next!!

So, remember how I described us all meeting up, with the dragon claws tearing off the roof of the prison? Well IT WAS THERE. THE DRAGON WAS THERE!!!!
It was circling around, blasting the keep with its lightning breath, causing fear with its presence…

Can I admit something here? I thought it was totally beautiful. Like, I’ve never seen anything like that ever, just the power and majesty; even the violence was like a force of nature or something…

Then it attacked, and it broke the reverie!! Emoji

It was all a bit of a chaotic blur, I have to admit: archers were firing, I used my eldritch blast (my new name for it! Like it? I think it sounds mysterious and deadly! OooOOoo… Emoji), people threw javelins…but in the end, Zane’s leadership won the day for us! He inspired the troops enough to drive it off! It was amazing! I can’t recall exactly what he said, all I know is how I felt.

We’re so lucky to have him leading us, we really are! If we’re going to get through this mess, it’s going to be because of Zane Sevenstrings! Emoji

No, I didn’t get hit by the dragon…my injuries and overall gross-ness now are because of what came next.

I dunno if it’s because they saw their dragon fly off or whatever, but the besieging forces surrounded the keep and asked for a parley. This HUGE brute of a dragonman (different from Serevin…he’s a “dragonborn” and is different from what came at us from below…this thing looked like a blue dragon did it with an ogre! I know! EEEEWWWwww!) comes out to talk to us from below. He’s telling us they’re about to leave, but…he wants one of us to go out and meet him in single combat.

Who was going to be crazy enough to do that?! No way, I’m thinking, nobody goes down there…

Then I see it. He has a family hostage. And the father of the family is in the keep with us.

Anyone can see he’s not winning that fight; Hells, I don’t think ANYONE is winning a fight against THAT thing. But he’s got to try, right?

Anyone who’s not looking at him is looking at us. We’re the ‘heroes of Greenest’ after all…no one’s looking at me, though. Zane (obviously!), Serevin, Thorogrim, and even Kindra (harder to see her, though!), but not me.

Who looks at the tiefling for heroism, right? Emoji

I look out and see those kids, so scared…I look at that poor man who knows, KNOWS! he’s going out there to die, but is doing it anyway, for the sake of his family…and I think about how I never had that from my own parents…and it just kinda dawns on me.

I should be the one to go out there. It should be me.

No one looks at the tiefling for heroism means no one cares if the tiefling dies…but if I can just last long enough for the family to be safe, than maybe my life will have meant something.

So, I gather the group and tell them I’ll be going down to face this hulk of a thing.

Can I admit something here, friend?

It’s stupid, and girlish, and makes no sense, but…see, there seemed to be some kind of bond forming in our group. I felt like we were really tight, you know?

But none of them tried to stop me. Yeah, they said some things to discourage me from going, but…no one else stepped up. I have to admit, that really made me sad. At one point, Serevin came up and I thought for sure he was going to send me back in and take my place, but…he just did some sort of weird blessing on my horns then went back into the safety of the keep.

They just let me go out there. Even Zane.

Stupid little girl, right? I mean, he’s Zane Sevenstrings, he could have any woman he wanted; why would he care for a dirty tiefling orphan from Alm?

(Bright note! Kindra wasn’t right there when I made my announcement, but she ran and caught up to me before I headed out. She told me she would go out instead of me. What a sweetie!! I just love her! But there was no way I was going to let her get hurt, even though I would have loved to see her jumping around kicking it in the face! She insisted though…like a real friend. So we played rock-paper-blade for it, and I won. Nothing beats rock…Emoji)

Besides, I had a plan. A longshot, but a shot. I had just enough energy for one more big spell; I figured if I could get the spell off quickly, I’d charm the thing and get them to leave that way. And I did! But it’s will was too strong for my magic, broke the spell and threw a spear at me. It missed but it went straight through a rock behind me!! Yikes! So, naturally, I panicked and ran, trying to keep a huge distance between me and it. I even got off a great shot with my eldritch blast (love that name!)…but that just angered it. Before I knew what happened, it breathed lightning all over me (!) and I blacked out.

I woke up in this bed. Thorogrim and Zane saw to my wounds and told me just how close I came to dying. It was really scary to hear them describe it. On the plus side, the man was reunited with his family, so that’s good…and…yeah.

Don’t get me wrong, I’m glad to be alive, glad to be part of a group that did some real good…I’m just disappointed I guess. I thought I had found a group that…oh, never mind!

“Tieflings shouldn’t expect such things!” as the orphan nanny used to say whenever I asked why I didn’t have any friends. One day I’ll learn that lesson! Kindra being the exception, of course. 🙂

I am going to lie here in pain now, and hopefully fall asleep. Talk soon!