Even those that escaped the collapsing council hall chamber wouldn’t come any closer to the ruins that fell deeper into the underground – they had seen at least a glimpse of the impossible horror that emerged. It might even be fair to say you yourselves were still partly in disbelief, even if the black, writhing tentacles that had lifted the star-mask creature a dozen feet off the ground now lay collapsed and twisted around the abomination.

Behind it – the star-mask meteorite that started all of this.  Its strangely coloured interior was visible since it was no longer whole as promised, only half of it remained intact, the rest was strewn over the small area beneath where the council chambers once stood, thought dormant or even just still sealed, now proven to be quite the opposite… another type of monster altogether.  What kind of prize was this? Could The Archmage even make use of it now?  These were questions for later perhaps – felling this Star-Mask abomination – this brain – this wasn’t over yet.

The scream was pure horror.  One of the brave few who had crept closer than most during the fight now recoiled into the gathering crowd, falling backwards off their feet, eyes wide in horror and pointing at the tentacled star-mask on the ground before him, its mucous-like residue still clinging visible on his cheeks and forehead.  It lay still in front of him, and two other dwarves lept forward with a shovel and club, smashing at the still, quicky-dissolving form.

And elsewhere from beyond the interior walls that shaped the districts of Frostfire, other screams were heard, other calls for help.  Across the city, Star-Mask parasites were dying, their invisible connection to this freakish ‘intellect’ now severed… or so you hoped.  In the day or two to come, you’d learn that the infestation was much more pervasive than you may have thought – Captain Shale suggesting it may have been one for every 10 citizens…

That night and as the sun next rose outside the Frostfire stronghold, the remaining council members each, in turn, and in their own way, apologized and thanked you for saving their lives, and the lives of perhaps everyone in Frostfire.  Your intuitions now far-better honed after the short-lived ‘inquisition’ when you discovered the secret of where those few members had hidden the ‘prize’ served you well – those that knew now realized their gross misjudgement, and those that didn’t felt guilty enough for their naivete.

Reid Runefoot’s betrayal shocked everyone, but it was slowly becoming apparent to those members of the council willing to discuss it, that she could not have acted alone…

… and after an extensive two-day search by those few guards that Dran could spare amidst the confusion and panic of Frostfire, Toren Longbrew and Russit Rubymaker were nowhere to be found.

Hailed as heroes and fawned at even more than when they first arrived in Frostfire, the dwarves of Frostfire tried every means to honour them.  Merchants were desperate to restock whatever you needed, the prestige of ‘the saviours of Frostfire’ shopping in their store was well worth the cost.  Even the residents of Frostfire, some you recall who greeted you before with doubtful looks now invited you warmly into their homes for as grand a meal as they could muster.

The council scribe and Frostfire record-keeper, Mournbyrn Bristlearm, was first to insist that the terms of the contract drafted at the council be honoured.  After being shown where the well-hidden Frostfire vault was, Captain Shale made sure that members of his remaining guard were there to allow you time to search inside without being bothered, and Mournbyrn waited patiently no matter how long or how many times you wished to return to ensure that the item you chose was the one you most preferred.  The gold and coinage you had with you was ‘coloured up’ as you wished, and the sum offered was more than generous.

It came as little surprise then, when council-leader Sturm Goldflayer, with his strong ties to the Miner’s Guild got the council to quickly decree that the heroes’ likenesses would be carved into the lighting columns that first welcomed you as you entered Frostfire – that future generations will remember what happened here.

It is widely accepted that the adventurers have saved the city from a terrible threat, but many of those who heard about what happened but didn’t see any direct evidence of the Star-Mask threat and had trouble understanding what really happened.  Further, Ereveron noticed a slightly less-warm reception compared to the other members of the party – you gather because a number of residents witnessed the single-shot execution of council member Reid Runefoot once she admitted she was in league with the Star-Mask threat.

The Dwarf King, when he learns of what happened at Frostfire, sends Duchess Halla to Frostfire.  She tells heroes the remains of the meteorite are theirs to do with as they wish without exception.  She does, however, ask if The Archmage still plans to share the location of the vault he has long protected…  She continues by

apologizing again for Snakewalker’s assault the first night after her decision,

but also for having heard about the mercenaries that Uebol sent after them on the slopes of Balor.

As thanks for their tremendous efforts, Halla also explains that the heroes names will be sent to all dwarven strongholds and they will be welcome anywhere in the realm.

The day after your audience with Halla, emissaries of the Archmage sent by Sephare arrive to construct a teleportation ring capable of transporting huge amounts of inanimate material.  Gallydyn and Minoru immediately share a glance – the devices the emissaries are using… well… they’re tall, totem-pole metal-like objects and they arrange them around the circumference of the remnants of the meteorite… they’re not quite the same – Minoru rubs her arm reflexively, but…

The emissaries also ask that the heroes take some privacy in the city, and they give them a gem that creates a familiar sphere through which the image of Sephare, much as before, communicates the following: 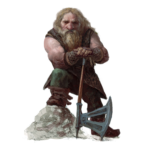 Meanwhile, Captain Dran has been busy recruiting to try and shore up defences destroyed by Star-Mask assailants in case Orc Hordes are spotted in the valley below again – the threat that started all of this in the first place.  Because of such an exodus of the trained and strong members of Frostfire at the Dwarf King’s command, the criminal (and now understood as alien) element of Frostfire was to take hold.  Dran, initially perhaps somewhat mild-mannered when you first arrived, seems to have been emboldened by the events in the stronghold, and seems filled with purpose.

Ensuring that the ruins of the council chamber remain out-of-bounds for all but those given explicit permission to conduct their investigations or preparations there, the rest of the residents of Frostfire and their curiosities are kept at bay – the work of re-building Frostfire will take a long time.

Dran invites the heroes to stay, clearly hoping that you might hope to help with patrolling, pursuing, and perhaps even defending Frostfire until they are ‘on their feet’ again, but is too polite to ask explicitly.  Duchess Halla makes no mention of the heroes returning to Ironfort – she is well aware of the disparity that exists between the defensive forces of the two dwarven strongholds.