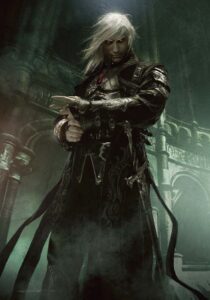 Morpheus can tell by their stance that the guards at the gates have limited martial experience, and he can also tell that they’re uncomfortable with his appearance. He thanks the gods that he was smart enough to have Legion pull up his hood to conceal his features as much as possible, and that the growing twilight helps to conceal him where the cloak fails.

What if I don’t understand them? There is a momentary panic, but the monk realizes it’s too late to walk away now, as to do so would cause too much suspicion. No, it would be best to leap and see where you land at this point.

“Welcome to Winterhaven,” The first guard says, his long spear gleaming in the sunlight. His companion, a much older and more experienced looking man, nods as he looks them over.

“Pleased if you could be telling us your business here,” the second guard states. Their accents are different, alien in fact, but Morpheus still understands them fine. Relief floods into him, which causes him to smile widely. The guards visibly relax at what they take to be a sign of friendliness.

“I am Morpheus,” the monk says as he bows to them, “My companion and I have travelled very far in search of your scholar. We’ve many questions to ask and much information to share.” It was a gamble, for sure, but Morpheus spied the wizardly looking tower rising above the walls, and it seemed the best way to make a contact. Surely any scholar from this word would be fascinated to speak with explorers from another world.

Both guards smile at this, as they pull the gates open for them.

“You’ll be looking for Valthrun then,” says the first as he gestures towards the tower inside, “Good luck getting his nose out of those books long enough to talk to you.”

“And if you’re looking for work,” adds the second, “Lord Padraig is hoping to gather more fighting men at Gardmore, which Valthrun can bring you up to speed on.”

The monk nods as he passes the two men. He hesitates on the threshold of the quaint town, feasting in the smells and sights of an alien world. Taking his first step into Winterhaven, Morpheus feels a shifting of fates, as if a path has opened up before him.

I’m coming Shareen, he thinks to himself, and nothing will stop me.