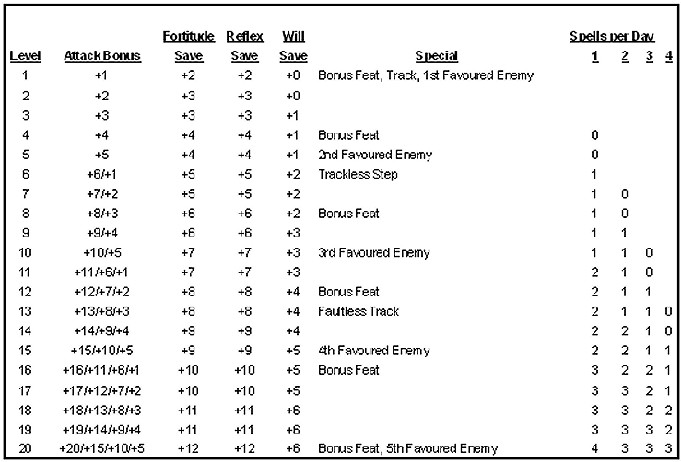 Class Features
All of the following are class features of the ranger.

Weapon & Armor Proficiency:
A ranger is proficient with all simple and martial weapons, light armor, medium armor, and shields. Note that wearing armor heavier than leather imposes a penalty to the ranger skills Climb, Hide, Jump, and Move Silently. Swim checks also suffer a  –1 penalty for every 5 lbs. of armor or equipment carried.

Spells:
As a divine caster, with caster level equal to half the Ranger level.

Track: A ranger gains Track as a bonus feat (see the Track feat description in the PHB).

Favored Enemy: At 1st level, a ranger may select a type of creature (see list below) as a favored enemy.  Due to their extensive study of their foes and training in the proper techniques for combating them, rangers gain a +1 bonus to Bluff, Listen, Sense Motive, Spot, and Wilderness checks and to damage rolls if within 30 feet. The damage bonus does not apply to creatures that are immune to critical hits. When the ranger selects a new favored enemy, the bonus against previous favoured enemies goes up by +1.  For example, a 12th-level ranger will have four favored enemies, with bonuses of +4, +3, +2, and +1.  The Ranger Favored Enemies table that follows lists possible categories for a ranger’s favored enemy.

Trackless Step:  As the Druid ability.

Note: Rangers may not select “humanoid” or “outsider” as a favored enemy, but they may select a more narrowly defined type of humanoid (such as goblinoids, humans, or reptilian humanoids) or outsider (such as devils, efreet, or slaadi).

Faultless Track:  Rangers with this ability can track even those using Pass Without Trace or similar magic with a -10 penalty.

Thanks to:
Monte Cook for his suggestions www.MonteCook.com