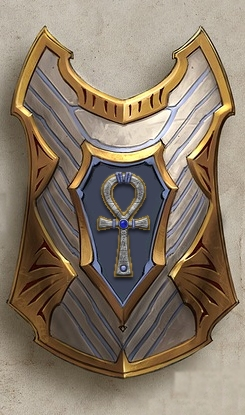 Unofficial leader of The Scourge, High Priest and Chosen One of Parthen the Protector, Tanamier‘s responsibility has always outweighed his heart’s true desire. He now commands Nyrond’s Last Stand Army on the Almorian border against Duke Szeffrin.

Tanamier Half Elven hails from the elven city of Nesselentiss, in the Duchy of Ulek. His mother, Realimya, was a war wizard for the city, while his father had apparently been a priest of a human god; Tanamier has only vague memories of him.

Early on in life Tanamier had apprenticed himself to his mother, learning the ways of magic with the aim of becoming a war wizard later on. Lacking the natural grace available to his full-blooded elven brethren, Tanamier made up for it by learning to spellcast while wearing heavy armor. He also learned to use a variety of weapons; all in all, he had the makings of a fine war wizard. In addition, good fortune always seemed to fall upon patrols that were accompanied by the half-elf.

Tanamier was just a recently graduated war wizard when House Norquar’s humanoid armies attacked with their Shadow Circle leaders. Desperately trying to provide assistance during the battle, Tanamier was briefly separated from his mother. Fighting his way through orcs, goblins and bugbears, he caught sight of her just as she was brought down by a Shadow Druid’s magic.

Devastated, Tanamier‘s mind barely registered events when he was swept up in the exodus from Nesselentis, so distraught was he over witnessing the death of his mother with whom he was so close. As they were escaping, a strange thing happened: Tanamier‘s band was set upon by a group of bugbears. Tanamier wished that his fellow elves would fight well enough to allow them to escape… and each warrior seemed to be granted an extra burst of energy, just enough to allow them to defeat the goblinoids. When he went to tend to one of his companion’s wounds, Tanamier was astonished to realize he had magically healed his companion’s injury. Tanamier now recalls this as the first time he had acted as Parthen’s emissary.

Tanamier soon left on his own afterwards, trying to discover the nature of his mysterious powers. It was during these self-discovery travels that he met with the original members of the Scourge of the Underdark.

The rest, as they say, is history.

Tanamier has become almost something of a figure of myth in the Flanaess, a situation he is not exactly comfortable with. While he realizes that people appreciate his efforts, he is somewhat uncomfortable with the hero-worship he has received; it goes against his practical, down-to-earth nature. Tanamier‘s intellect and wisdom are his greatest traits when dealing with any foe or problem; he is usually able to acutely pick out the best course of action in most situations with a level head.

When dealing with great evil, however, Tanamier‘s vengeful side comes out. The other members of the Scourge of the Underdark still remember with shock how Tanamier dealt with the derro slavers that had sided with the aboleth when he discovered how they cruelly they had treated their slaves. Trapping them in a pit with the use of a Dig spell, he then burned them alive with greek fire. Fortunately, this dark side to Tanamier‘s personality rarely shows itself. Instead, his innate heroism, without seeking the spotlight, is always in the forefront. Tanamier is always the first to think about how a particular course of action will affect innocents and bystanders; he will always willingly sacrifice his own safety for that of the defenseless, and indeed, his own party members.

However, as the high priest of Parthen the Protector, Tanamier is at his best when using his magic to strengthen and safeguard his comrades in accordance with the mandate of his god. There have been many times when the day has been one through the subtle use of Tanamier‘s magic and prayers. Still, when it seems no one else is able, Tanamier is able to rush to the forefront, dealing with the enemy face-to-face in an efficient and deadly manner… as the pit fiend Pallistren can attest to.

Tanamier is a man who feels the burden of his responsibilities, and yet his strength of character is more than enough for him to handle them and make the tough decisions that only he can. He is held in the highest esteem by all who have met him, even by such persons as Bigby, King Archbold, Prince Lynwerd and even the Necromancers of Skahlehn. Tanamier‘s no-nonsense approach to things makes him an arguably more respected figure than his priestly brother Tempus.

There is only one person who has the ability to make Tanamier feel ill-at-ease, and that is Inkaneesta. The beautiful barbarian priestess and half-elf are very much in love but keep each other at arm’s length each due to their responsibilities. Tanamier is longing for the day when he can make Inkaneesta his and live the quiet, normal, peaceful life has always dreamed of. He is grooming Crysus, whom he almost considers a son, to take his place one day so that his dream may be accomplished.