Requires the use of the Dungeons & Dragons Players Handbook, Third Edition,

Some men and women feel that divinity is not only the province of the gods, but is instead a goal that can be achieved through perfection of the mind and body, allowing oneself to become in tune with the workings of the universe.  There is a Path, they say, that one can travel to meet this goal, and along the way one discovers that the limitations of the body and senses are fictional, that we are capable of so much more than we know…

The ones who travel down this mysterious, hard-to-define road are the Pathwalkers.  They come off as otherworldly, distant, and hard to understand.  In reality, many Pathwalkers seek to set an example for the rest of the mortal races, hoping to inspire countless others to achieve their full potential as well.  Some return to their plane of origin in order to share their accumulated wisdom with the masses; some remain sequestered on other planes, perhaps having achieved true godhood; and some see the Path as a path to power, hoping to become a higher class of being in order to dominate others.
Multiclass monk/psions most frequently decide to walk the Path, and amongst psions, egoists and seers are most common, though savants and nomads are not unheard of; telepaths and shapers tend to find different means to their ends.  More martially oriented characters looking to walk the path often qualify as monk/psychic warriors.

Bonus Feats: At 2nd level the Pathwalker may choose a bonus feat.  It must come from the following list.  All feats that have prerequisites must be met.  The Pathwalker may choose another bonus feat at 5th level and 8th level:  Body Fuel, Dodge, Inertial Armour Redux, Mental Leap, Power Touch, Psionic Body (may be used retroactively), Psionic Charge, Psionic Dodge, Psionic Fist, Psionic Metabolism, Rapid Metabolism, Speed of Thought, Stand Still, Talented, Unavoidable Strike, or Up the Walls.

Perfect Health: At 3rd level, the Pathwalker is immune to all diseases and poisons, but not magical poisons.

Energy Resistance: At 7th level, the Pathwalker has mastered his body’s resistance to damage from corporeal sources so as to subtract 5 points of damage from any energy attack (acid, cold, fire, lightning or sonic) per round.  Each energy has its own 5-point limit.

Empty Body: As the monk ability, using only Pathwalker levels.

Perfect Self: As the 20th level monk ability.  Upon achieving Perfect self, the Pathwalker’s appearance usually undergoes a minor physical change appropriate to their alignment and deity (if applicable).  For example, the eyes of a disciple of Lathander, the Morninglord, might change to glowing gold. 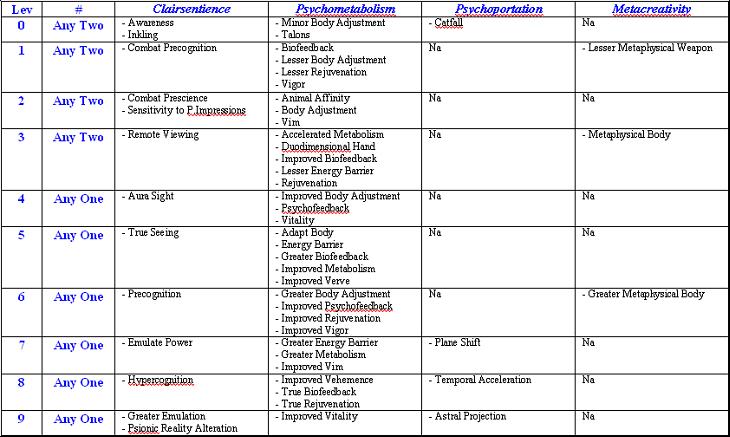 Psionic Powers: A Pathwalker continues to hone the powers of her mind as she goes up in level.  For every Pathwalker level, she gains an effective manifester level in whatever psionic class she belonged to previously. She does not gain any other class benefits (bonus feats, psionic combat modes, improved psicristal abilities, etc.)  Simply put, add her Pathwalker levels to her previous psionic class levels to determine total PSPs and powers discovered. If she belonged to two psionic classes, she must decide which manifester level goes up between the two.  The Pathwalker must follow certain restrictions when choosing her psionic powers, as these represent her dedication to the Path.  She must abide by the following (when possible):