Previously: The Serpent’s Tale, Part I

Things were pretty steady this afternoon at The Serpent’s Tale – and Avina could almost predict who’d walk in and when.

Hud, Balan, and Arden had already been here hours as usual, and Gwen & her beau came in right on schedule.  She’d see little Jirim in here soon for the few pints his mother has him bring home, and they’d have a few of the guards come by for warm wine before they take their posts.  Avina liked the routine – and everyone liked her back.

It’s better than going home. She thought to herself.  Few things worse than an empty house.

As if on queue, the large oak doors swung open and Gawne stepped in – Avina’s favourite of the guard – always packing a joke to earn an extra bit when filling the wineskin.

“Ah, a beauty to behold…” Gawne imitating a huge hug from the other side of the bar.  “I’d stand guard at the Tale for the half the coin I get in the tower if you asked me!”

“That’s nice of you Gawne, but who’s stop the trolls and dragons if you weren’t there?”

“I’m not the only one, lass – they can save everyone else, I’ll save you.”  He beamed a sarcastic smile as he took a stool and unslung his wineskin, laying it on the bar in front of Avina.

Avina beamed a smile and grabbed the skin, uncorking it and shaking it slightly.  “This wineskin will only hold so much, you know… ”

“Aye, and today’s offering will make sure it’s full!”

“Ok, let’s have it then…” Bart came in from the back with a dish cloth slung over his shoulder and started wiping up the bar.  “Stop trying to sweet-talk my best worker.”

“Ok…” Gawne straightened up on his stool and thought for a moment.  “Why did the knight wield a sword made from cheese?”  He looked back and forth at the faces of Avina and Bart expectantly… a grin already on his own.

Avina rolled her eyes already, but Bart’s brow was furrowed trying to beat him to the punchline.

“Because the cheese was extra sharp!” Gawne blurted, slapping the bar with a guffaw.

“Hahaha – you’re going to retell that one tonight as your own, admit it.” Gawne taunted.

“No one will ever retell that one, you crazy man.” Avina finished, recorking the skin and passing it back across the bar.

Straightening himself and putting the stool back, Gawne flipped the usual silver in the air towards Avina who caught it almost without looking.

“M’lady.” He gave an exaggerated bow and smiled as he headed back out into the cold.

“Seeya tomorrow!” Avina called above the gush of wind pouring in before the heavy oak door closed behind him.

The afternoon went on like that – predictable and peaceful… until it wasn’t.

Bursting through the door, panting heavily, Hud’s wife Sara immediately locked eyes with her husband at his usual table and then, realizing the calm of the tavern called out, “Haven’t you seen!?”

“What?” Hud sprang to his feet – this might have been the first time in months Sara had come to the tavern.

Avina was immediately alarmed.  The cold from outside chilled her faster than the look on Sara’s normally lovely face. 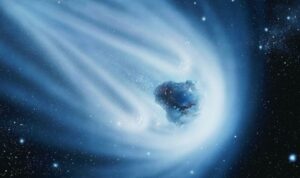 Bart, hearing the commotion pushed past Avina and took Sara gently by the shoulders to step outside.  At this point, the other patrons were realizing something was going on and started to stand as well, curious what would put someone in such a state.

“Gaiar’s ghost!” Avina could hear Bart exclaim from just outside the door.  He almost never invoked that name, Avina knew it was worth a look… could it be?

Sara pointed outside for Hud to follow, and he and Avina both stepped out, the same look of disbelief on their faces.  Sara was right.

It was huge – a mountain in the sky – over the hills north of the city – it looked motionless at first, but Avina could see already that it wasn’t.

It was getting closer.

Other people had heard about it too – and they were pouring into the square – all staring at the same thing.  Avina’s heart was pounding.

“I don’t believe it…” Hud said more to himself than his wife.

“What do we do?” Sara asked, her eyes still fixed on the huge rock.

Avina’s eyes couldn’t have been wider – the mountain-sized comet was partially blocking out the mountain range behind it.  “Isn’t it… moving… slowly?”  Avina wasn’t sure about the words as they left her mouth, never having seen something like this before.  But it was certain now… it was getting closer.

This apparently occurred to others as well, and someone in the distance screamed.  Then there was running.  Avina couldn’t tell who or how many, nothing could pull her gaze from the incredible sight. The feeling of fear started welling up inside her stomach… or was that… excitement?

“It’s still getting closer.” Bart said as if the growing size of the huge rock wasn’t obvious to everyone.

“Is it… glowing?” Sara was hugging Hud’s arm now tightly.

“Is it a comet?”  Balan’s vocalized what at least Avina was thinking.

“It’s going that way…” Avina could see now… the size of the rock made it easy to misjudge its trajectory.  “It’s going… that way…” she pointed to the other end of town.

The closer the huge object got, the faster it seemed to go – streaming white behind it… ice?  Magic?  And the noise… as if it was forcing the very air out of its way as it screamed across the sky.  The noise kept growing… people in the street covered their ears… the impossible sound of a mountain in the sky… Avina couldn’t believe her own eyes.

“It’s turning!” Bart called out – others could be heard yelling the same thing just to be heard since everyone was covering their ears.

Turning now, the massive object roared closer still, the air splitting with the sound and just as it passed the village, it exploded in a deafening, ear-splitting cacophony.  Brilliant white light blinded Avina but she would not look away.  A flash large enough to obscure the mountain itself, but when her eyes adjusted, Avina saw the real horror.

Huge boulders – rocks – hill-sized – red hot and trailed by huge tails of flame rained down from the sky.  People started screaming, but Avina couldn’t hear them above Sara’s.

From the doors of the Serpent’s Tale, Avina could see the huge meteor fading into the distance, and with it the deafening sound.  Prying her hands away from her ears, the sound of the comet was replaced by the fiery rocks, like huge hearth fires, crashing down from the sky.

The momentum of the comet carried the huge meteors beyond the city gate, that could be seen, but as they crashed to the earth, the explosions and fires could be seen already down through the square and out the gate.

Avina turned, breathing more steadily now to Sara who was still clinging to Hud – his gaze still fixed on the woods beyond the village, some now burning.

“Those fires won’t burn long in the cold and snow.” Bart decided.  “But I’m gonna go check anyway.”  As he started towards the impact site, Avina reminded him:

“Don’t be silly I won’t be long, you can watch it,”  Bart replied, but looking now, saw that everyone who was inside was now outside standing around him.

“I’ll keep an eye on ‘er for ya…” one patron helpfully offered, his mug still in his hand.

“Don’t worry we’ll make sure no one pours themselves anything until you get back…” another said burping loudly.

“On second thought… maybe you’re right,” Bart said to Avina.  “You go first.”  Rubbing his arms with a shiver, Bart turned to head back inside.  He knew Avina’s mind well enough.

“Darn right!” Avina yelled excitedly, quickly grabbing her scarves from behind the bar and running out the door.

“Don’t be too long!” she heard Bart call at her back, but she was already in full stride.  The sense of panic in the square had abated, but some were running with buckets towards the gates.  Avina wasn’t alone in rushing towards the smoke and fire.

This is incredible!  And she wasn’t about to miss a minute of it.

Next: The Serpent’s Tale, Part III