Caelynn spoke up, “Friends, As matters demand more of our attention, I must admit my thoughts are vexed by what is transpiring in Celene. We have reason to believe that the Tower of Domination has been built. I think that mad fool Erianeth went mad as a result and the lives of so many others has likely been destroyed in the process (my poor dear Jelendra). But we are simply dealing with the ripple effects of what truly needs to be dealt with. Celene must be saved. You all know how I feel on this. I will attempt to communicate with Melf and apprise him of the situation and what we have discovered during our recent forays in the Feywild.”

“Tanamier, have you discovered why the life returning rituals are failing? Do you think this ties in with the Towers in Celene? I cannot see how it would be.”

Griften shuddered at Tempus’ words. A look of horror spread across his face, concealed by the deep hood of his familiar brown robes.

Could it be? Surely not… it can’t be happening now!

Griften turned slightly towards Caelynn as the elf spoke, but the words felt hollow as Griften’s mind spiralled wildly.

This has happened before. Long ago… This is my fault!

“Tempus, no heart is more fierce than yours; if Agravelenon cannot return our comrade’s soul to us, then perhaps all that we have striven to prevent has finally befallen us.”

Griften laid his hand on Tempus’ broad shoulder and turned to Tanamier, “You know of which I speak, brother. The Council of the Planes was unanimous; all present warned of this. Philidor’s words still haunt my dreams.”

Griften bowed his head slightly and closed his eyes in a painful grimace and continued, “… and you’re right Caelynn. The folly of the elves could not cause this. Their efforts pale in comparison to what I suspect has finally happened.” 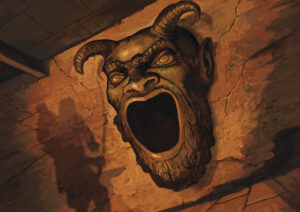 Tanamier found himself frozen for an instant as he raced through what this could mean, surely they would not have willingly abandoned us? I refuse to believe that!

Griften’s words shook Tanamier to the core, only because he too was thinking the same thing.

The commander in him took over. “Tempus, we must commune on this together. Have the chamber readied. I will meet you there shortly. Also, let Inkaneesta know that she should preserve the bodies foes as long as she can, until we resolve this.”

“My friends, I am afraid that a great evil has returned to the world.” Tanamier then summoned his captain of the guard and master smith. “captain, I want the standing guard doubled, as well as both the interior patrols and scouts along the front immediately. Also, place guards at the chamber entrance were we have placed our comrads”. He then turned to the smith, “take care of our equipment and ensure that it is ready to go as soon as possible”.

“Caelynn, you are right that this has nothing to do directly with Celene, but our quest to thwart the coming evil may well start there…”

Desperate to bring back their allies, some old enemies show themselves in an unlikely place.