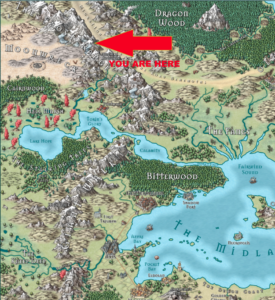 The Elves and Dwarves Showed up

The oracle was the object of the General’s attention.  She gave us the ability to heal and do a full heal-up after we saved her.  Did the General want the oracle as part of her going against the Orc Lord?

General Gul was keen on capturing her and controlling Scarsdale Keep because it was an ancient site on which forces of good and evil once collided and whoever controls the site and wins the favour of the spirits can not only see the future with more clarity than anyone else, but can also shape it.

Before the Oracle collapses, she tells the party that their destiny is to meet the General by a waterfall, but that the General won’t leave the confrontation alive.

Moving Through the Battlefield Unscathed

The Orc Lord wants the adventurers to go ahead of the army to Ironvale and slaughter every orc that they find there, then leave a trail that will lead the Orc Lord towards the east. Then they are to capture and hold a keep known as Scarsdale Fort. If they do this then General Gul will come to them, and they can kill the renegade warlord in the confusion of the battle.

To this point of the campaign and location in the dragon empire, other than the trading post before you crossed the troll bridge, the last signs of life which were not orcs, hobgoblins, bugbears or goblins, was at Ironvale where, (ADDENDUM) you all noted something curious to that of the dead dwarves, there were hardly any dwarven bodies, and it looks like almost all of the dwarves managed to escape, perhaps fleeing into the mountains.

As of now, you are in an isolated area of the dragon empire (AGAIN) in the Frost Range which is occupied mostly by the above mentioned.

Once More into the Breach

The heroes have ducked and weaved their way through the massive battle. As they reach the crest of a small hill they find a space free of living combatants. At that moment like the tide changing, the dwarves and elves pour out of the castle, pushing the orcs back from Scarsdale Fort. A whole wing of the orc army pours around the hillock like a sea of evil. The retreating orcs ignore the heroes, at least until some ridiculously huge half-orcs step out of the flow of bodies and walk menacingly towards the heroes. The half-orcs grin, because they know that the adventurers have nowhere to flee to.

The orc army is in retreat, but the Starport heroes spy General Gul. She is holding aloft a red banner from which radiates waves of magic. Brath, Ranier, and Ereveron instantly become more orcish, growing tusks and developing swine-like snouts. The rest of the heroes feel themselves filled with sudden orcish brutality. The heroes do all they can to fight off the urge to run back and attack Scarsdale Fort. Magnus has to be restrained by his companions as his savagery overtakes him and he tries to join the orc army. The magic passes and the heroes revert back to normal, but the effect on the Red Flag Army is startling. The vast orc horde has stopped in its tracks, and with a mighty roar like a thousand earthquakes turns and runs towards the castle once more. The orcs are mesmerized, those who don’t move fast enough are simply cut down by the rank behind them! The good news is that the orcs are, for now, ignoring the heroes. Provided the heroes do not get too close to an orc, the orcs are too fixated on Scarsdale Fort to even notice them. It requires three skill rolls to get close to General Gul. It is up to the players how their characters try to get close: disguised as orcs, running really fast and hoping for the best, a magical ritual, etc. The first roll is DC 15, the next DC 20, the next DC 25. Every time an adventurer fails a roll they get stabbed for 4d4 damage by a passing orc (or a goblin pack knocks them down and takes all their stuff – players choice).

The rogue general has retreated to a hilltop near a cliff. It is a perfect defensive position: high ground, water on one side, and a cliff on the other. The cliff has a waterfall. All the Starport heroes have to do is get past General Gul’s personal honor guard and they can fight the renegade warlord. Her honor guard is trolls. General Gul towers over the trolls – she stands over three orcs high.

General Gul is nearby but has not noticed the fight with the trolls. Her entire attention is given to the battle. If the Starport heroes wish to grab a quick rest in one of the tents they may do so, but due to the situation, they only gain their normal recovery values (healing potions work fine though). The orcs inside the tents are dead, General Gul bit their heads off in a fit of rage when the battle briefly turned against her. General Gul comes out of the battle-trance that the magical standard she was holding induced, and notices the adventurers for the first time…

When the orc army see that she is no longer leading them they panic and the fight goes out of them. Though it takes another hour of fighting the elves and dwarves win the day, and the Red Flag Army is pushed back to the cliff. Those few orcs who escape flee back to Ironvale. That night in Ironvale the Orc Lord himself descends upon the settlement.

By morning no member of the traitorous Red Flag Army is left alive.

Hailed as heroes by the Elf Queen and Dwarf King’s emissaries alike, the heroes discover the General’s treasure hoard – thousands of gp worth of jewellery and gems, most of which are blood-stained and clearly of dwarven craftsmanship.  Offering it back to those from whom it had been stolen as a means of rebuilding in the aftermath, the heroes’ generosity will not soon be forgotten.

Invitations to the court of The Elf Queen, the great halls of The Dwarf King, and even The Orc Lord himself, the heroes will have their dinner cards filled as long as the wish.

After consulting with the elven wizards, it is decided to keep the Crimson Banner at Scarsdale Fort, which the heroes are now being asked to run – trusted by elves and dwarves alike.