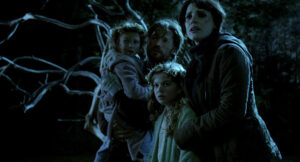 The heroes pause, breathing heavily, some battered some bruised. There is still mayhem all around. Burning fires, screaming, roving bands of humans and kobolds.

At their feet lay 8 dead kobolds, behind them huddle a family of 5, crying in relief at being saved from a horrible death.

Ahead of them, scant hundreds of feet away is the keep. Walls standing 5 stories high, made of brick and stone, it feels like the only bastion of safety in Greenest. The circling dragon is nowhere to be seen for the moment. The marauders don’t pay them much heed, with the red robes and adventuring gear they almost blend in.

The adventurers look around at each other, seemingly for the first time now that there is a brief pause in the action. Who are they? Why are they here? What will they do now?

The elf drew back her hood, which had somehow stayed down throughout the fight. She observed the druid tending to the wounds of the young bard with no emotion on her face, but instead an almost dead stare. Finally, she turned to the woman, protecting her children still, and nodded to her “You are brave,” she whispered. She then turned to Luther.

“As I was saying before,” she began, her voice barely audible amidst the chaos, “I have been following the cult for some time. From what I can tell, they have been treasure hunting. I assumed it was to finance a military action of some kind, but somehow I don’t think this attack is it.”

Foluwa helps Scribe to his feet, dusting the loose dirt and grass from the young bard’s garment. The difference between the tribesman’s tiger and panther hide vestments, and the more civilized clothes of Scribe, would almost comical in it’s contrast, were they not in the midst of the chaos of a village being torn asunder. The druid gives scribe a pat on the shoulder and a nod, then moves off to where he sees the one called Luther conversing with the soft spoken, yet deadly woman by the newly rescued family.

When Foluwa reaches the group, he bows his head awkwardly at both. In the eyes of the chain-clad warrior, Luther, he can see the same sort of concern and anxiousness that he himself is wrestling with. Is it too late to fulfill his promise, Foluwa wonders? Did he travel all this way for nothing? It is too late to give up now, and he knows he must see it through.

“I am not an expert on civilized lands,” Foluwa says in his outlander accent, “but this I know; this display in savagery is almost more brutal than any I have seen in my native jungles of Chult.”

Turning to the terrified family, aware of how frightening his tribal marks may be and in as disarming a way as he can, he speaks to the woman,

“Please, madam, can you tell me if the family of Joss Whitefeather made it safely to the keep? It is of great importance to me that I find his wife and children.”

Luther stands protectively over the family, his blue eyes scanning the village intently. His eyes are drawn to the keep which lies less than 100 yards away. He looks back at Arobyn, who approaches him now. After Whisper‘s comments, he responds.

“My Lady, thank you… and you as well” he says looking at Foluwa and Scribe. “Arobyn and I are here to investigate the attacks and find the source so that we can bring the information back to our town and build the right defenses. But seeing this, it is clear that we must now help marshal this town’s own defenses and drive off these animals” he says, as he kicks a kobold spear. “We must join with the town militia. Alone we will fail. “

Scribe‘s unfocused gaze floated aimlessly as his eyes adjusted and the light-headed feeling slowly faded. The voices nearby and cries in the distance barely registered in his still-ringing ears. He felt like a small breeze might bowl him over; his legs were like water underneath him.

That happened fast… he thought to himself. Scribe had been knocked out before; last autumn he tagged along with the town guard routing a small band of brigands.

I forgot what that was like… gotta be more careful…

His thoughts coming faster now, Scribe brushed the grass and dirt from his clothes; his head finally stopped swimming and his focus came back. Now he could process what had just happened; did the strange woodsman Heal him?!

Face flushed with embarrassment, Scribe looked around him, fearful everyone’s gaze was on him. To his relief, they were all looking elsewhere: Luther and Foluwa were talking with the family, Arobyn stood with his swords at the ready staring outwards, and the whispering woman stood against the shadow of a nearby building, her gaze and its target hidden by the red hood.

That’s what I get for trying to show off… Scribe thought to himself. What a fool I must seem.. He tested his steadiness and went over to lean against a wall. These people bested every kobold… incredible…

Reaching quickly into his pack, Scribe drew out a thick book and flipped it open. Quill in his hand, he began to write as quickly as his still shaking hand would allow. Amazing, these people…

A few moments later, satisfied and closing the thick book, Scribe thought to himself: I hope Leosin is ok…

“We must get to these people to the keep.” Luther said decidedly, his eyes scanning the scene around them. Beads of sweat matted his tussled hair to his head and he still had an iron grip on his longsword.