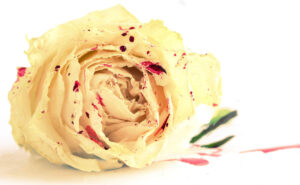 The Monks of the Yellow Rose are a collective of individuals who share a common interest in the betterment of the individual self through discipline, introspection and peace. Thought to be a largely reclusive organization, they are regarded with a passive respect; seen as neither benefactors or enablers, offering little in the way of military power, economical impact or political influence. History

The temple of the yellow rose is nestled high in the Raker Mountains, shielded against the harshest of mountain conditions but securely out of the reach of the humanoid (and other) raiding parties that sometimes find their way to that altitude. The grounds are several acres in size; the temple itself occupies just over half of this space.

The surrounding area of the Rakers is not the least hospitable of mountain ranges, nor the highest. Wildlife and mountain foliage dots the snow-covered peaks and benefits from the fact that the Raker mountains do not serve as a path for caravans travelling north and south.

There are some small hamlets in the foothills of the Rakers, and it is with these small communities that the Monks begin most of their trade. These communities serve as staging points for traders who wish to risk the long climb into the mountains to the temple itself, and to those fewer still seeking out the monks for other reasons.

After what is thought to be at least hundreds of years of occupancy of the temple at the top of the mountain, there are well-used and clear roads from the foothills up the mountain that dwindle to small paths higher up the mountain.

The temperatures of the mountain range dramatically from foot to head. In the foothills, weather is just barely colder than normal temperature in the surrounding area. At the temple however, average temperatures range from 10 degress Celsius in the summer to a bitter -40 degrees in the cold winter months when the wind chills to the bone.

The studies of the brotherhood have aims that often diverge from conventional godly teachings. As a good-aligned order, most monks have a respect and admiration for the old gods; but as events unfold in the Flannaess this will almost certainly change. Some monks have even begun to combine their study and devotion to the new gods of which stories have been heard. These good-aligned gods include Parthen, Agravelenon, Heirophylia and Kralana.

The vast majority of the monks of the yellow rose speak and interact using Common, primarily due to the interactions with traders and merchants from the foothills surrounding the Rakers. On temple grounds, Common is used about 95% of the time. Sporadically, Old Oeridian is used; but only among the Masters of the Order; and usually only for communications sensitive to the remaining monks. This is a taught language at the monastery; and hints strongly that those beginning the order had ties to the Great Kingdom, where this language is still widely known.

The Brotherhood has been founded on fairness and peaceful co-habitation with the diverse races, religions and other factions in the Flannaess. This does not mean, however that combat and competition do not have their merits. In accordance with this undrestanding, certain tiers of accomplishment within the order require a show of prowess. These events are not common, as most members of the Brotherhood seldom venture out into the world for reasons other than representing their order as ambassadors, but those that do move up through the ranks do not do so without contest.

When a monk reaches a level appropriate to challenge for a new title, they can elect not to challenge. If they wish however, the current title-bearer must accept the challenge. The fights are always hosted at the Temple, and are overseen by the High Masters or Sensei of the order. Combat is not to kill, however, and rules of honour and engagement are paramount.

As many of the members of the Brotherhood have diversified abilities, combat is not limited to physical struggles. Anything goes, as long as the rules are upheld. Unsuccessful combatants assume the lower title of the successful challenger, and they may elect to challenge again but must wait 6 months to do so.

At each level, the sign of stature within the order is predominantly displayed with the coloured robes detailed below. These are not, however, iron-clad rules, as there are circumstances that may justify the use of another colour. No monk may wear white however, this is reserved at all times for the Grand Master only as a sign of respect. As monks grow in their understanding of both the tenets and discipline of the order, they wear the well-known brown robes of the order. Only when they begin to reach the upper levels of the organization does their colour of attire change to reflect that very few (or even only one!) member of the order have earned this rank.

Upon reaching the status of Master of the South Wind at level 20, monks of the order may now be sent as ambassadors to represent the Brotherhood of the Yellow Rose. This has been a recent development in only the last several decades; an edict by the sitting Grand Master of Flowers. Ambassadors have so far been announced by the Sensei of Sun and Moon, and these orders are presumed to be from the Grand Master herself and so are never questioned. Ambassadorships often are years in length due to the time required, but not all monks are selected to assume this role, and some are only short-term assignments.

All Monks of the brotherhood have a trade of some kind. Whether they came into the folds of the brotherhood with that skill or have trained in it since, all monks contribute to the community at the Temple. Farmers on the southern slopes, livestock, blacksmithing and carpentry are all trades that help to generate the goods and items the monks either use or trade for gold.

The temple grounds are very modest for the most part; allowing the fewest distractions to the discipline and focus required by monkly pursuits. Guest accommodations are comfortable and maintained impeccably.

Monks that come to the Temple may have personal wealth independent of what they earn in working with the community. There is no tithing in the brotherhood, so some monks still command resources and property they had prior to joining the brotherhood

The most common means of transportation to and from the temple monastery is by the winding stone paths against the snowy mountain. The gates and the temple grounds see large and small caravans often into the courtyards and vendors even sometimes set up small carts within the walls shielded from the harsh wind.

For the monks and brotherhood members who command more powerful means, there is a large transportation circle high in one of the temple’s towers used to come and go as required by the monks. The room is guarded and not easily accessible, and also protected by magics such as Forbiddance, but surely others as well.

For as long as anyone alive can remember, the order has acted only to observe the goings-on around them. Ambassadors from the Yellow Rose are not common, but their commitment in decades past to non-participation has made them an afterthought in political maneuverings.

Recently, however, the Grand Master has been sending envoys and ambassadors to nations across the Flannaess with increasing frequency. These charges are more information gathering than anything, and the reputation of the Brotherhood of the Yellow Rose often guarantees welcome and accomodation without hesitation. This is in stark contrast to the manner in which the Scarlet Brotherhood secures the same effect.

Of particular note in the growing influence of the brotherhood is their representation far from the Temple in the Rakers. Brother Griften‘s (currently the Master of Dragons) Citadel of Serenity has been offered as shelter and housing for the Brotherhood deep in the Oytwood forest, and for this, Duke Owen of Geoff is glad.